This visual Wake-on-LAN utility allows powering up one or multiple network PCs with a single mouse click. It is ready to work in networks of any scale and intended to automate WOL operations. It includes features for detecting MAC addresses of remote PCs and sending WOL packets to multiple PCs in parallel. WOL operations can be executed on demand or automated and executed on schedule at a defined date/time or on a regular basis daily, weekly or monthly.

This Wake-on-LAN (WOL) utility allows you to power up network PCs quickly and easily. It automates all Wake-on-LAN stages from collecting MAC addresses to sending WOL packets and can be used in networks of any kind.

What is the difference between EMCO WakeOnLan and other Wake-on-LAN utilities? EMCO WakeOnLan is designed to wake up multiple PCs simultaneously, and it is ready to work in large networks with complex structure. The program automates all operations required to wake up network PCs, from scanning a network to detect available PCs to collecting MAC addresses of all network PCs using different methods and sending WOL packets. The program includes built-in scheduled, so WOL tasks can be executed automatically.

The program supports different WOL delivery methods and is able to wake up PCs located in the same subnet or across subnets. After executing a WOL operation the program checks status of remote PCs and reports if the operation was executed successfully or failed. 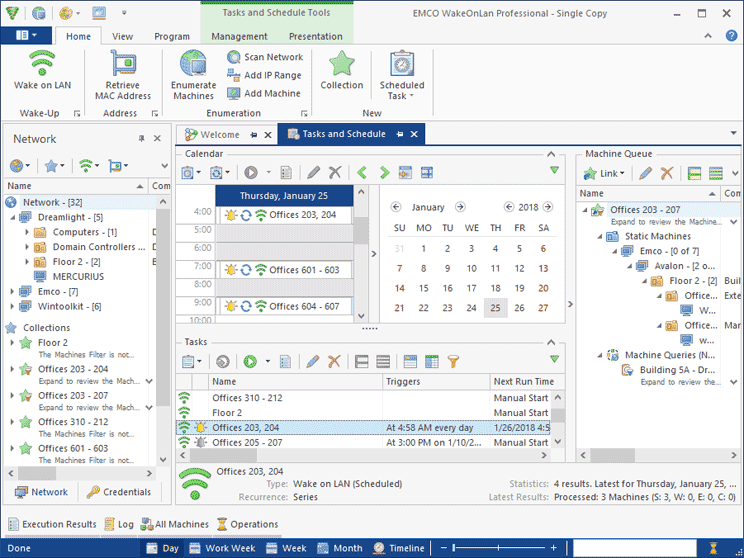 Compare Features and Select the Edition

The program is available in two editions with the different set of the features.
Compare Editions

The Free edition allows you to scan a network and discover PCs available in the workgroups and domains. This edition of the program allows you to select up to 5 network PCs and send them a Wake-on-LAN packet to power them up remotely. Wake-on-LAN is initiated on multiple selected PCs simultaneously to reduce the wake-up time.

This edition allows you to create up to 2 tasks to wake up remote PCs on schedule. You can schedule a wake-up for one-time or recurrent execution. This edition works as a Windows program, so you need to keep it running in an active Windows user session to execute scheduled tasks. If you log off from Windows or reboot the PC, the program is closed and the scheduled tasks aren't executed.

The Professional edition of the program can be used in networks of any size. It allows scanning domains and workgroups to detect available PCs. This edition doesn't limit the number of target PCs in the Wake-on-LAN operation, so you can simultaneously wake up as many PCs as you need across your network.

You can automate wake-up operations in your organization by scheduling Wake-on-LAN operations. You can create as many WOL tasks as you need and schedule them for one-time or recurrent execution. This edition of the program works as a Windows service, so scheduled tasks are still executed if you log off from Windows or reboot the PC where the program is installed.

If you are looking for a reliable Wake-on-LAN tool for a corporate network, you can benefit from the features listed below.

Depending on your network configuration, you can use different methods of transmitting WOL packets. In particular, you can use any of broadcast, unicast, directed broadcast and other transmission methods in order to deliver WOL packets to PCs located in the same or different network subnets. You can also specify a custom remote UDP port, if required.

Using the program, you can completely automate Wake-on-LAN operations in your organization. You can create WOL tasks and schedule them for automatic one-time execution at a defined date and time or for recurrent execution on a daily, weekly or monthly basis. The scheduled tasks can be managed though an intuitive visual interface.

Wake-on-LAN can be executed on static and dynamic groups of target PCs. You can configure static groups by selecting target PCs manually. To configure dynamic groups, you can use queries. The queries are executed every time before the WOL execution to report the actual set of PCs, for example all PCs from a particular Organization Unit in Active Directory.

EMCO is Trusted by

Automatic power management software that allows you to schedule and execute remote shutdown, Wake-on-LAN (WOL) and other operations to manage network PCs.